On our journey so far so much has evolved and changed. But there has been one constant since the very first box of gum; our Moustache Heroes. They’ve appeared in various places, on each evolution of our packs. Sadly the eagle-eyed of you may have noticed they’re starting to disappear. Soon they’ll be gone for good so we thought we’d give them a little send-off here.

They came into being when we designed our first chewing gum boxes as there was a big empty white space and we figured we should fill it with something. Inspired by old cigarette cards, we decided to pick a theme that felt like a collectible series. Apparently our logo looks a bit like a moustache so we settled on interesting mustachioed gentleman through the ages.

The criteria for picking them was broad; they just needed a ‘tache and an interesting back story. Apart from that we just tried to steer clear of anyone who’d committed mass genocide or was generally offensive (sorry Fu Manchu).

Over time, the collection grew and grew – but we did lose a couple to the great barber shop in the sky. Very early doors, when our gum was sold in about five shops, we got a call from lawyers representing the estate of Charlie Chaplin. They asked us to kindly refrain from using his likeness which we of course did (whoops). How they managed to find out remains a mystery. We also dropped Mr Potato Head after we figured the folks at Hasbro might not quite get the joke.

We all have our different favourite Heroes. Trevor Baylis and Daley Thompson get bonus points for being local legends… only last month we bumped in to DT himself in Putney (the ‘tache is even more powerful in the flesh). At trade shows Tom Selleck was the runaway favourite (we made them all into badges) with Burt Reynolds a close second.

But all good things must come to an end and we figured it was time for something new on the packs. So farewell our furry-lipped friends. Thanks for the memories, the laughs and the threatening phone calls from lawyers. For posterity here’s a selection of our favourites… 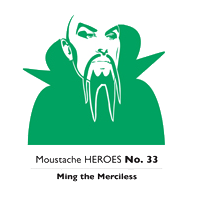 Ming the Merciless. Nemesis of Flash Gordon and ruler of planet Mongo, when he wasn’t grooming his matching tache and eye-brows he enjoyed collecting fine wine and destroying distant planets with his death ray. The inspiration for Darth Vader, he was last seen impaled on the pointy end of the Ajax rocket before turning into a pile of sand. [Evil laugh]. 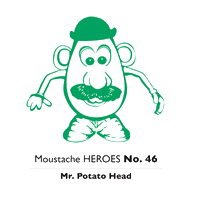 Mr Potato Head (born May 1 1952) sports a rigid, plastic moustache which has the advantage of being worn either pointing up or down depending on mood. The original Mr Potato Head kit did not contain a potato body (kids provided their own choice of vegetable) but did contain eight different types of facial hair. Many parts still remain the same, although in 1986, after much lobbying and a few self-help books, his pipe was discontinued. 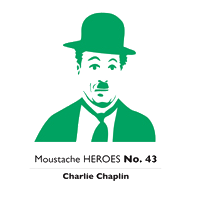 Charlie Chaplin (1889 – 1977) sported a toothbrush moustache made popular by working class men as a response to the big showy moustaches of the rich. Roommate of Stan Laurel and tennis partner of Greta Garbo, he was probably the most famous actor of his generation. A busy man, Chaplin also fathered 11 children, the last at the age of 73. The last film he watched was Rocky (he was a big fan) before he passed away in 1977. The victim of grave robbers he was eventually reburied under two metres of concrete. 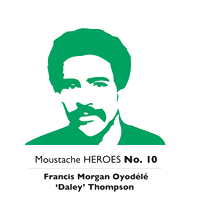 Francis Morgan Oyodélé ‘Daley’ Thompson CBE (born 30 July 1958) is a British Decathlete regarded by many as the world’s greatest ever all-round athlete. Undefeated between 1979 and 1987, he broke the world record four times and won two Olympic gold medals. His dream of winning a 3rd was ended by a snapped pole vault. Many thousands have in some small way shared his pain after breaking joysticks playing his classic 1984 video game, Daley Thompson’s Decathlon. 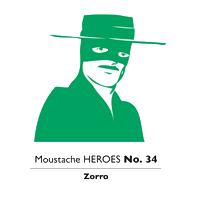 Zorro (Spanish for fox) sports a classic pencil moustache also known as a mouthbrow. The secret identity of nobleman Don Diego de la Vega, Zorro avenges the helpless, punishes the cruel and aids the oppressed. Created in 1919 by Johnston McCulley, his inspiration was the infamous bandit Joaquin Murrieta. Murrieta himself was caught in 1853 by California State Rangers who kept his head in a jar as proof of his capture. The jar then toured California until it was destroyed in the 1906 San Francisco earthquake. 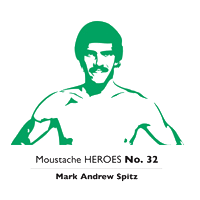 While most swimmers opt for goggles, caps and all-over body waxes, Mark Andrew Spitz (born February 10 1950) won seven gold medals at the 1972 Munich Olympic Games with nothing but a pair of super-tight speedos and his trademark bushy tache. At the time he claimed his lip-appendage was a “drag reducing” aerodynamic device but later admitted he’d made this up to psych out his Russian counterparts. Talented, hairy and cunning – the perfect mix. 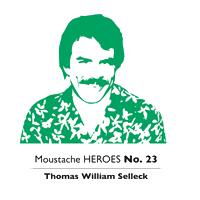 Thomas William Selleck (born January 29 1945) sported a classic natural moustache. In 1980 Selleck landed the role of Magnum PI, choosing the job over an offer to play Indiana Jones in Raiders of the Lost Ark. Bad decision? Only history will tell. Magnum ran for eight seasons and 162 episodes, winning him an Emmy for Outstanding Lead Actor in a Drama Series in 1984. His majordomo, Higgins, had a much less impressive tache but did have a Victoria Cross (reasons unknown). 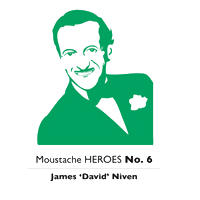 James ‘David’ Niven (1910 – 1983) sported a well groomed pencil moustache. An actor, officer and gentleman, his early days in the army came to a hasty end following subordination charges (he interrupted a Major-General’s lecture on machine guns to leave for dinner with an attractive young lady). After escaping out of a window, he headed to America where he was a gun polisher, whisky salesman and rodeo promoter before becoming one of the finest actors of his generation. 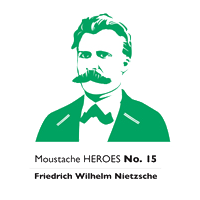 Friedrich Wilhelm Nietzsche (1844 – 1900) sported a bushy Walrus moustache – a serious moustache for a serious man. The German philosopher was one of the founders of existentialism and was famous for his God is Dead, Will to Power and Übermensch theories. In a nasty incident in Turin in 1889, he collapsed while trying to stop a horse getting whipped and woke up insane. He spent the rest of his days sending wild letters signing off as ‘Dionysus the Crucified’. 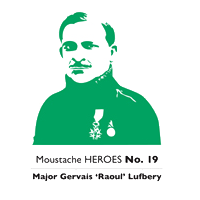 Major Gervais ‘Raoul’ Lufbery (1885 – 1918) was a World War I fighter pilot and proud wearer of a well-groomed pencil moustache. After joining the army to avenge the death of a friend he went on to become one of the greatest flying aces of the war. In between battles he amused himself by taking his pet lion cub for walks around the base (as you do) and inventing the epic French 75 cocktail. 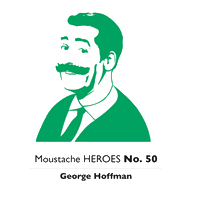 In April 1947 a number of English gentlemen established The Handlebar Club at The Windmill Theatre in London. The object of the Club is “to bring together moustache wearers (beards being strictly prohibited) socially for sport and general conviviality” and it is still going strong to this day. It is tradition that every year the club appoints a ‘Prime Handlebar’; the member with the finest facial plumage, the best of the best. In 1948 George Hoffman and his nine inch lip foliage was the first to receive the honour and a legend was born (www.handlebarclub.co.uk). 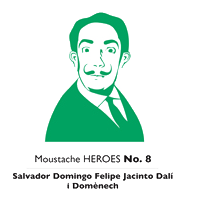 Salvador Domingo Felipe Jacinto Dalí i Domènech, 1st Marquis of Púbol (1904 – 1989) sported a moustache as long and elegant as his name. “Since I don’t smoke, I decided to grow a moustache – it’s better for the health” was his explanation for his upturned waxed lip warmer. The surrealist painter’s huge body of work included painting, film, sculpture, photography and as if all that wasn’t enough, in 1969 he also designed the Chupa Chups logo. 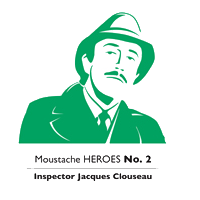 Inspector Jacques Clouseau (born September 8 1920) is a French police officer famed for solving the case of the missing Pink Panther diamond. A dangerous man to be around, he is partial to destroying priceless pianos, getting parts of his anatomy stuck in vases, shooting other officers in the backside and regularly receiving badly disguised beumbs. Despite all the chaos, Clouseau always gets his man, even if not intentionally. 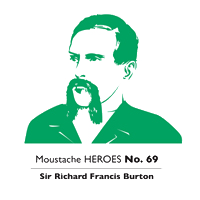 Sir Richard Francis Burton (1821 – 1890) sported a unique moustache that we call The Spaniel. The British explorer, writer and soldier famously challenged a fellow Oxford student to a duel after they mocked his floppy mouthbrow. On top of that, he spoke 29 languages, survived being impaled through the head with a javelin thrown by Somali warriors and, in 1883, even brought the Kama Sutra to England. A lover and a fighter. 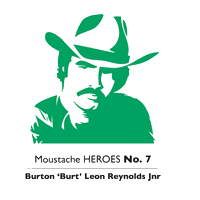 Burton ‘Burt’ Leon Reynolds Jnr (born February 11 1936) is a butch Emmy award-winning actor who sports a butch award-winning moustache. He is perhaps best known for his 1977 classic, Smokey and the Bandit. While not critically acclaimed, it did inspire a generation of kids to buy CB radios and start referring to themselves as things like Smokey Bear and The Duke.
He is also prone to regrettably turning down great roles including James Bond, Superman and Han Solo. Yikes. 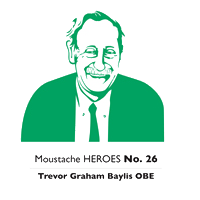 Trevor Graham Baylis OBE (born 13 May 1937) sports a fine classic English moustache. The inventor’s best known product is the wind-up radio, which he devised in order to help communicate information about the spread of AIDS to the people of Africa. As well as being a legendary inventor he’s also been a professional swimmer (narrowly failing to qualify for the 1956 Olympics), a stuntman and an underwater escape artiste in the Berlin Circus. He now helps inventors protect their ideas and get them to market (www.trevorbaylisbrands.com). 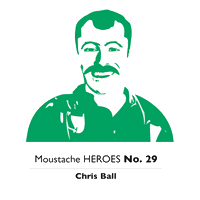 RAF Flight Lieutenant Chris Ball sports a handlebar moustache as popularised by generations of British airmen. In 2008 he was posted to a United States Air Force squadron in Afghanistan who promptly told him to trim his splendid plumage. Ft Lt Ball refused insisting that his tache, which measured six inches from tip to tip, was within Queen’s Regulations. After a check of the rule book and a “frank exchange of views” his lip appendage was left firmly intact. An MOD spokesman said; “Local commanding officers should not issue instructions to officers which cannot be fulfilled by reasons of difference in dress regulations.” “Attire, facial hair and discipline would always follow RAF rules.” Quite right too.