As it’s National Sugar Awareness Week, we thought we would share this little low sugar recipe we cooked up for our friends over at Oppo. If you haven’t heard of Oppo, they make epic sugar free ice cream, so we decided to make them a crumble to pair it with. And this isn’t just any old crumble – it’s crunchy, nutty, gingery, and it’s sugar free (made with our favourite sugar substitute xylitol instead). It’s so good, you really should head to the kitchen and make it right away.

1. Peel and chop the pears into small cubes and gently heat in a pan with 20g of xylitol and the red berries until soft. Add 100ml of water to help the fruit cook and simmer until it’s all soft and the liquid has reduced to a shiny pink syrup.

2. Whilst the fruit is cooking, turn the oven to 180 degrees.

3. To make the crumble topping: rub together the flour and cold cubes of butter with your fingertips until it resembles really fine breadcrumbs. Add the oats, xylitol, almonds, ginger and cinnamon and mix.

4. Spread the topping onto a lined baking tray and bake for 10 minutes. At this point the topping should be starting to clump together which is good, so take it out, give it a little mix and pop it in the oven for a further 5 minutes.

Note: When you get it out the oven the topping won’t immediately go crunchy like it would with sugar. This is because xylitol doesn’t caramelise when it is heated like sugar does. Don’t worry though, you just have to allow the topping to cool a little and it’ll firm up and go nice and crunchy.

5. Pop the hot fruit mixture into a heatproof dish and add the crunchy crumble mix on top. Bake for 5 minutes so it’s ready to serve hot. Top with two scoops of vanilla Oppo, or salted caramel if you prefer. 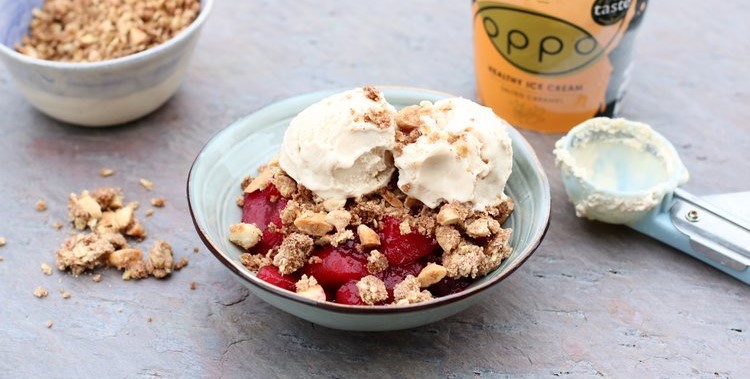